Roche, the world’s leading pharmaceutical company, has a broad portfolio of medicines in oncology, immunology, infectious diseases, ophthalmology and diseases of the central nervous system and is the world leader in in vitro diagnostics and tissue-based cancer diagnostics. This article reviews how the company has been making progress with new clinical trials data in two of its major clinical research areas, cancer immunotherapies and haemophilia medicines.

“These encouraging results suggest that combining anti-TIGIT and anti-PD-L1 cancer immunotherapies such as tiragolumab and Tecentriq could potentially represent a novel approach to address unmet needs in cancer,” said Levi Garraway, M.D., Ph.D., Roche’s Chief Medical Officer and Head of Global Product Development. “With tiragolumab, we have the largest and most advanced anti-TIGIT clinical programme, and we look forward to the results of our Phase 3 trials in lung cancer and other challenging tumour types.”

Data suggest that the combination was generally well-tolerated, showing similar rates of Grade 3-4 treatment-related adverse events (AEs) when adding tiragolumab to Tecentriq compared with Tecentriq alone (22.4% vs. 25%). The CITYSCAPE study forms the basis of an industry-leading development programme across multiple settings and tumour types.

The Phase 3 SKYSCRAPER-01 trial is currently ongoing to confirm these results in the PD-L1-high population, with the goal of bringing this treatment option to patients. Earlier this year, tiragolumab was granted breakthrough therapy designation (BTD) by the FDA, representing the first anti-TIGIT therapy to be granted this designation. Since 2020, Roche has initiated five Phase 3 trials evaluating tiragolumab plus Tecentriq in early and metastatic disease in lung  and oesophageal cancers. Tiragolumab is also being evaluated in other solid tumours as well as in haematological cancers. 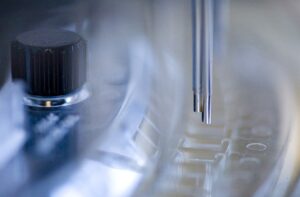 “Despite initial successful treatment, many people with follicular lymphoma often experience relapse. Mosunetuzumab could potentially become a highly efficacious treatment option that can be administered without the need for cell collection or genetic engineering,” said Chief Medical Officer Garraway. “With mosunetuzumab, we also aim to offer a therapy that can be administered in the outpatient setting to people with this devastating blood cancer.

Roche has submitted the initial marketing authorization application for mosunetuzumab to the EMA, with the hope to bring this drug as soon as possible to people with NHL while Roche subsidiary company Genentech plans to submit the new data to the FDA in the near future for approval consideration. If approved, mosunetuzumab has the potential to be a first-in-class CD20xCD3 T-cell engaging bispecific antibody in NHL.

Additionally, as part of Roche’s broad pipeline of haematology immunotherapies and application of novel combinations, key data for the bispecific antibodies mosunetuzumab, glofitamab and cevostamab have been presented, including initial results from the Phase 1b CO41942 study of mosunetuzumab in combination with lenalidomide in people with R/R FL who have received at least one prior line of therapy demonstrated encouraging preliminary efficacy and a tolerable safety profile. In addition, data from the Phase 1b/2 GO40516 study evaluating mosunetuzumab in combination with Polivy (polatuzumab vedotin) showed promising efficacy and favourable safety in heavily pretreated patients with aggressive R/R NHL, while a Phase 1/1b NP30179 dose-escalation study evaluating glofitamab as a monotherapy and in combination with Gazyva/Gazyvaro (obinutuzumab) following pretreatment with Gazyva/Gazyvaro in patients with R/R B-cell NHL showed promising activity in both R/R FL and R/R mantle cell lymphoma (MCL), an uncommon but aggressive form of lymphoma with poor prognosis for those who progress.

Results from an interim analysis of Roche’s Phase 3 HAVEN 6 study, also released in December, have shown that the company’s haemophilia treatment Hemlibra (emicizumab) demonstrated a favourable safety profile and effective bleed control in people with moderate or mild haemophilia A without factor VIII inhibitors.

While the treatment and management of severe haemophilia A are well-established, there is less information and treatment guidance on moderate and mild haemophilia A, which can lead to delayed or missed diagnosis of bleeding episodes. Considering this population may not use preventative treatments, they may experience worsened clinical burden, with less than 30% of people with moderate or mild haemophilia A living a bleed-free life.

“We are pleased to see that Hemlibra continues to show benefit in additional haemophilia A populations, regardless of severity,” commented Garraway. “The clinical evidence for Hemlibra derives from one of the largest pivotal clinical trial programmes in haemophilia A, with and without factor VIII inhibitors. We remain committed to working together with the haemophilia community as we further explore the efficacy and safety of Hemlibra in broader populations.”